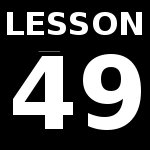 Last week’s lesson was about making comparisons, so how would you compare that lesson against your other Cebuano lessons? 🙂 This week, in Lesson 49 we will learn about two more focuses!  The Maka- Actor Focus Potentiality and the Ma- Object Focus potentiality.  There seems to be plenty of potential for some important learning this […]
To access this post, you must purchase Learn Bisaya with our Bisaya Buddy Course.