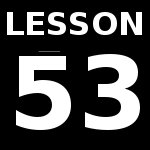 We’ve been making nouns, and this week we have another round of Noun Makers! In Lesson 53, like I said, more Noun Makers.  You are “on the verge” of finishing up with this noun making!  That is a hint about this lesson, watch the video and see what I mean! Good news this week as well, […]
To access this post, you must purchase Learn Bisaya with our Bisaya Buddy Course.