You are here: Home / All Lessons / Lesson 59 – More Causatives 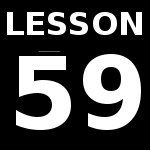 This is your last real lesson!  You are right at the finish line!  Next week it is your last review test, and you are an official Cebuano/Bisaya Speaker! In Lesson 59 it is all about Causatives, continued from last week.  As I said before, it is a difficult concept for non-Cebuano speakers, but you can do […]
To access this post, you must purchase Learn Bisaya with our Bisaya Buddy Course.